"Someone out there will hate you now. But what you take is what you allow.”  Sarah Bettens (song: “Come Over Here”)

In spring 2014, I was applying to be Superintendent of the Ross Valley School District. The search firm employed by the RVSD Board of Trustees conducted a comprehensive process that included a detailed application, writing samples, current letters of recommendation, several rounds of interviews, in-person conversations with more than thirty colleagues from my former district, extensive reference checks and a background investigation conducted by Baker-Eubanks, LLC.

One of the first things I learned about RVSD from the May 22, 2014 "Leadership Profile Report," was that the top challenge facing the District and its new Superintendent would be "Manor School traditional/MAP conflicts."  As I progressed through the many steps of the recruitment and selection process, this conflict kept surfacing to the point where it became a theme.  In retrospect I had no idea of the full context regarding this long-standing and complex issue, but I knew this was an area I needed to research more closely if I intended to keep my hat in the ring.

Candidates for Superintendent positions typically have networks to call upon for candid information about school districts. I was no exception. Given my 36 years of experience serving four amazing Southern California school districts (two of them hired me twice), I'm blessed and thankful to have friends and colleagues throughout the State and beyond.  This includes several contacts who either had direct knowledge of RVSD or could refer me to reliable sources who did.  I reached out to a few of these contacts to learn all I could about RVSD and the conflict that seemed to be consuming it.

What I learned then, and virtually every day since, serves as a real-life study in bullying characteristics, behavior and the consequences to come for those who dare challenge it.

During the recruitment and selection process I spoke with several people who consistently described RVSD as a district "suffering from a 20+ year history of harassment and bullying."  They used terms such as "broken," "demoralized," and "hijacked," to describe the ways in which a small "alternative" program headed by two former RVSD Trustees, dominated the District's focus, energy, resources and time.  The result, among other things, was years of tremendous leadership and governance instability through constant turnover of Principals, Superintendents and Board Trustees.  At the time I was being recruited to come to RVSD, the District had just lost its ninth Superintendent in fifteen years, another Manor Elementary School Principal, another Director of Student Services/Special Education and another Chief Business Official.

Of all the information shared with me about RVSD, perhaps the most memorable comment I heard about the District's decades-old conflict was, "In a nutshell, RVSD is a scene out of 'The Magnificent Seven'."

That seemed like a bizarre reference and comparison, to say the least.  It definitely piqued my interest.

For those who may not know, "The Magnificent Seven" was originally released in 1960 and included a star-studded cast of veteran actors (see below). Adapted from the 1954 Japanese film, "Seven Samurai," the movie tells the story of a beleaguered farming village whose elders hire seven men to stand-up to a gang of marauding oppressors. 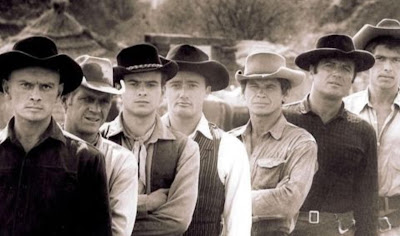 Oscar Wilde once wrote, "life imitates art far more than art imitates life."  I can't really say whether RVSD had become a scene from this western-period classic, but I do see interesting parallels between what RVSD has endured over the years and the on-screen actions illustrated by some of the "Seven's" most infamous lines:

Through all my research on RVSD and after having gone through a fairly grueling recruitment and selection process, I felt I had a pretty good idea what I was getting myself into.  I've dealt with bullies before, in many forms, and been around the block a few times.  In hindsight, I completely underestimated the magnitude of this particular situation and all it would take ... from all of us ... to cope with it.  I was once just like every other person who looks at our local situation, reasonably and rationally, from the outside in.  I thought, "How bad could it really be?"  I also thought, "We'll all just sit down and work things out."  That's what everyone thinks, until they learn through their own experience, what this little community has been living with for over twenty years.  This is where real life no longer imitates art.  On the movie screen it may take only seven people to bring about meaningful change, but in real life it takes far more than that.  And, unlike the movie cowboys who "... deal in lead, friend," our bully challenges are more than twenty years in the making and won't end just because the popcorn runs out.  Our script is still being written.